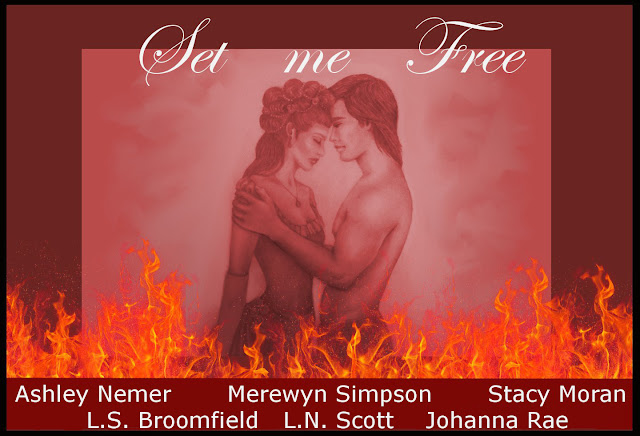 Can you believe that we are already up to chapter three? I hope you are all enjoying getting to know Renzo, Sera and Father Giovanni. This time around its my chapter, which you will find below.

Renzo must have walked the Villa Borghese for an hour or more before he found himself at the fountain. He always seemed to end up here at this very spot. Most days when he came to the gardens, the tranquility was enough to calm him. Failing that, the gentle sound of the water trickling through the fountain would soothe his woes.

On this day even the fountain did not have the power to dispel his torment. Renzo’s gut churned as he thought about the path his life had taken and he stumbled to a stone bench a short distance from the shallow pool. Taking his head in both hands, he tried to quell the anguish brimming to the surface.

Even by human standards, Renzo could be described as attractive. He would never be the sort of Romeo that the females flocked to, though somehow he held a charm words could not recapture. The rich burnt-coffee color of his hair always caught the light on a sunny day, its soft feathery texture belying other harsher elements of his Physique. If not for his misshapen pupils, his gold flecked hazel eyes would have drawn attention without a doubt. They only turned red when he was in emotional extremes, something that happened far too often these days. He might not have been beautiful but Renzo had intensity to his gaze and a sexual allure that could have put the world at his feet had he only realized it.

His whole life Renzo had felt like a tool or an instrument. Never once had he believed he mattered. Never once had his opinions or thoughts been of any significance.  Deep within the core of his being he yearned to make a difference. He didn’t care what, couldn’t comprehend how. He just needed to be more than he was. Mating with a female he did not know could never achieve that. Reproducing would only serve to repeat the cycle he had become trapped in.

Father Giovanni always showed him such patience though Renzo couldn’t understand how he’d earned it. The Priest saw something in him and Renzo would have given anything to understand what that was. Given everything his father had told him, all that was expected of him, how could he possess the good the Priest claimed? He was a demon… did that not speak for itself?

Renzo’s skin began to crawl as he envisaged his future. The linen fibers of his sleeves caught on rough hands as Renzo rubbed up and down his arms, a subconscious attempt to cleanse himself. Visions of escape filled his head but it would do no good. There was nowhere he could run; his father would always find him. The only place he had sanctuary was the church. Once he stepped inside he felt as though something within him lifted. Renzo’s clan had no time for the church and they never bothered him when he went there.

Since there lay an intense fire at his core, it did not take much for Renzo to feel as though he was about to explode. At times he often wondered what would ever happen if he allowed his anger to take charge instead of his fears and frustrations. It would truly be a frightening thing indeed. 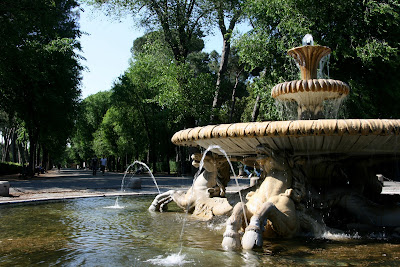 Finally the effects of the running water began to filter across the demon’s tense form. Letting the murmur of the fountain become the ice to quell his fire Renzo sighed and looked at the stone sculpture in the middle of the pool.

The agonized expressions of the four horses said it all. Their front legs emerged from the water in a feeble escape attempt, their backs bowed from the weight of the burden they were all forced to share. No matter how hard they reached, they would always have that heavy dish settled above them, robbing them of their freedom.  Renzo knew just how that felt and in that moment he realized why he was always drawn to this spot.

I want what I can never have. With a heavy heart, he dragged himself to his feet and made a slow retreat. There were many places he could have chosen to go, but Renzo knew that he was a creature of habit.  He hoped one day he would have more to offer Father Giovanni in gratitude than the apologetic look in his haunted eyes.  The striking silhouette his taut musculature usually cast faded as Renzo’s posture drooped, his strength sapped away by the hunger of his father’s greed.

Sera cracked her eyes open, met with an instant throbbing at the back of her skull. As her eyes adjusted to the dim light cast by the solitary candle, she saw a body lying in the shadows. Though he was face down Sera knew at once that it was Father Giovanni. His crisp white robes were the last thing her eyes fixated on before she fell and the world turned black.

Stifling a gasp, she fought to ignore the pounding in her head and looked around her. The small room smelled damp and musty as though it hadn’t been used in a long time, their only means of exit a door that bore no handle. Where are we? Judging by the eerie silence, Sera decided it was safe to assume they were alone. Not a single sound permeated the darkness beyond the circle of candlelight, it was so quiet she could hear her own soft breathing.

Sera looked down at herself expecting to see some manner of ruin. It came as a surprise to find that her dress along with all its underskirts remained perfectly intact. She fingered her hair, discovering the twin braids as she had styled them that morning. Her abundance of flaming curls still spilled forth from beneath the binding where the two braids joined.

Papa had always said that the autumn colors of her hair were the most beautiful thing he had ever seen. He loved when she wore it loose, the multicolored hues blending together when the curls bobbed as she worked. Mama –God rest her soul- thought differently. Sera’s hair worried her. You’re too easy to single out. She’d always told Sera. Put a hat on love, before someone recognizes you.

A month or two ago Sera would have still been confused by this but she was slowly beginning to understand. Her parents had been shielding her from something or someone. All this time she’d had no idea. A good girl who worked hard to keep the household and family enterprises running smoothly, Sera never once dreamed that she would be sought after by someone she had never met.

“Oh please don’t let it have been my fault,” she whispered, sorrow crushing her like a vice. “Please don’t let them all have died because of me.” Her ice-mint eyes blurred with tears and Sera swiped them away with the back of her hand.

Looking again to Father Giovanni, Sera sucked in a breath and crawled across the floor. Small dust clouds arose around her and it was all she could to do refrain from coughing. She didn’t want to make any unnecessary noise, not when she didn’t know where she was or who might come for her at any moment.

Unable to find signs of injury, Sera carefully rolled the Priest onto his back. The only thing that marred his pale complexion was the gash at his temple. Because he’d been lying face down, most of the blood had pooled on the floorboards and had soaked into the wood. With no way to tell how much blood he’d expended, Sera could only pray Father Giovanni could hold on long enough for help to arrive.The older man emitted a groan and writhed on the cold hard floor.

Grasping his hand in her own, Sera looked around in frantic hope there would be something in the room she could use to help him. Behind where he lay sat a simple wooden table. A few items of religious significance were scattered atop a rich purple cloth. Kissing the back of the Priests hand out of respect and uttering a silent prayer for his well being, Sera got to her feet and stepped closer to the table. Moving aside the items, she bundled up the velvet cloth until she had a makeshift pillow. Dropping back down to her knees, Sera slid it under his head.

The Priest began to shiver and his eyelids fluttered. Was that because of the cold or was he going into shock? Tugging her lower lip into her mouth, brows drawing down in consternation, Sera stroked his forehead with the palm of her hand. Though she was careful to avoid the injury at his temple, he let out another moan.

“So cold…” He whispered.

The cold had seeped into Sera’s bones too but she couldn’t sit by and watch the man suffer. She had been sent here to him for help. What if it was her fault someone had come here and attacked them? What if she was the reason they were locked in this room? Shrugging out of her coat, Sera lay it over the old man, tucking its edges around his body. Father Giovanni was tall but thankfully he was not an overweight man. Once opened out the coat was just big enough to cover him.

“Thank you child,” he murmured, gazing at her through half lidded eyes.

“I don’t know where we are,” Sera said in a voice that sounded far too small and distant to be her own.

“We are in one of the rooms beneath my church.” His words slow and labored, Father Giovanni shut his eyes for a brief moment to compose himself.

“This door locks from the outside, so I fear not.”

Tears sprang to Sera’s eyes and she tried to blink them away. “Is there anyone who will look for us?”

Father Giovanni’s face twisted into an expression of despair. “There is one, but child we must pray that he does not come.”

“He will be in far greater danger than you or I. The people who have done this to us do not seek him but if he tries to free us, his location will then be revealed to others. I would rather stay down here than risk anything happening to this man. He is so much more than he believes himself to be, a man capable of miracles. I have offered him my protection. Though I wish it not, I suspect he will come.”

Sera lowered her lashes, hiding the look in her eyes. I can’t bear for anyone else to get caught up in this nightmare that has become my life.