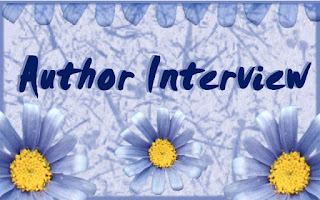 1. Have you always had a passion for writing?

Oh yeah...always. I gave up on the idea slightly when I did the family thing, but then I had this idea and started sneaking in wordage at the EDJ (evil day job) and bam...haven't stopped since.

I don't think it influences what I write so much as makes me want to write more and better. If that even makes sense...lol. I love all types of genres and sub-genres from Agatha Christie's mysteries to Stephen King's horrors. If I had to choose a fave author I would have to go with the latter probably, though let me tell you Dean Koontz's Lightning is a very well read book in my house.

3. What are your biggest inspirations?

Risking that I might sound slightly corny, my friends and family who root for me even when it looks like I'm trying to sabotage myself.

4. Do you have a technique in how you choose characters and/or locational settings?

Oh wouldn't it be easier if I did, but nope. They basically choose me. lol

6. What do you do to stay motivated and avoid writer’s block?

Wait! There's a way to avoid it? I've learned that you just write through it. If the words aren't "coming" to you, well you make them come. A writer writes...period. Oh, scrabble and candy crush help too...but don't tell my writing buddies *winks*.

7. How has becoming a published author changed your perspective on life and is it everything you expected it to be?

It's nothing like what I thought – it's better and it's not so much. I had these dreams of being some huge bestselling novelist that people would flock to the bookstore to grab my latest release...um...yeah not quite there yet lol. But never in my wildest dreams did I think I'd get emails from fans telling me how much they love my books. That is awe-inspiring!

Finding time in the day. I have my EDJ that is 40+ hours a week and I come home to being a full time author too. Sometimes it is trying and tiring – I thump my head against the wall wondering why I can't hit a simple deadline, forgetting that I haven't had a true day off in months.

I assume we are talking the non-human variety? Oh boy—I didn't mean that in the kinky give me a collar way...um... Oh-kay moving on, I don't personally have any but I live with a cutesie little dog that believes he is a cat sometimes.

Now we are going back to #8, I need time to have hobbies. I am learning to enjoy cooking if that counts.

11. Where is the most exciting/memorable place you have been in the world?

Took an almost 2 week vacation to Israel with my mama...loved it – amazing!

Ooooooh...my 5th book in my Wicked's Way series just got published. Now, Wicked's Way is an M/M series in a collection of books—Pulp Friction—with three other authors; Lee Brazil, Laura Harner and Tom Webb. We all bring something slightly different to the table that really enhances each book.

It started with us wanting to do those old fashion serial pulp fiction type of stories and then grew into a world of its own with each of our series being led by strong men who happen to be best friends and aren't afraid of getting their hands dirty for the good of others.

Our characters crossover into each other's books which creates a strong bond between them and the readers. Wicked Templeton is my main character. When I came up with him I initially pulled my inspiration from a whole bunch of eighties crime/drama shows, most notably The Equalizer with maybe a dash of A-Team. Wick is a cop forced into retirement because of an injury that the doctors won't sign off on. That actually worked in his favour because he decided to help people his way—answering only to his conscience...and let me tell you—he doesn't have much of that. He's got an unlimited supply of cash, a tech geek at his beck and call not to mention friends and enemies that help him along the way.

He's a cocky ass with a heart of gold. He'll admit to the former but never the latter.

The fifth book in his series is a significant one because it actually spills a LOT of secrets the first four teased you with...so it is beneficial to read them in order. Here is the blurb for the last one.

Wick Templeton is not dating Ned. At least that's his story—period. But when someone decides that Ned's time on earth is over, Wick doesn't bother with the semantics of it…his boyfriend is in danger and that's unacceptable.

What happens when the person targeting Ned just may be the only person Wick can't defend against?

Secrets are revealed, people are hurt, and a very shaky relationship is tested. When the dust clears nothing in Wick's life will be the same.
Caution: This is the fifth in the series, and while you can read this by itself...you know what? Forget it...no you can't read this one by itself and miss out on all the stuff that makes Wick so darn awesome, go back and start with the first one. 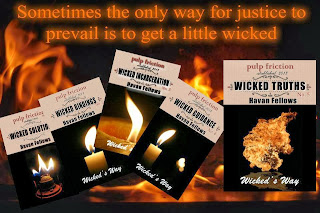 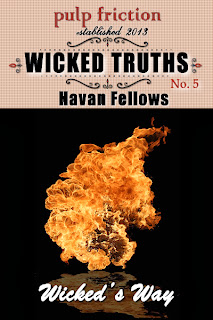 You can find Wicked's Way the series:
Amazon or All-Romance e-books