Today I'd like to share Torie James' COVER REVEAL with you. (Isn't it pretty?) Release date  for this novella is OCT 20, but in the meantime, you can check out all of her social media at the end of this post.

The Ghost of Secret's Gate 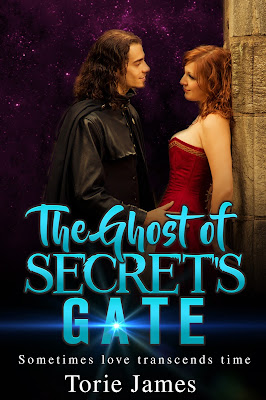 1861. Estranged from his family for a shocking betrayal, Highlander Lachlan MacQueen is a man who lives by his rules and no other. Reckless and rootless, he roams the border towns between Scotland and England, a mercenary for hire with an unspoken determination to regain all he's lost. By any means necessary.

When he inadvertently saves the life of Queen Victoria, she rewards him with a royal boon, the deed to a small manse nestled in Crathie called Secret's Gate and a stipend to ensure his outlaw days are over. But past sins demand payment and when the price becomes too high, Lachlan's untimely death becomes another skeletal ghost in an unopened closet.

She wanted to heal...

2016. Verity McClellan's memories of Secret's Gate are hazy at best. Two months spent in Scotland 25 years ago echo with remnants of a mysterious, hasty departure home to America and fresh beginnings with her mother, Pamela and new stepfather, Archibald MacQueen.
Now, she returns to claim the legacy left to her by Archie; the very manor of her erstwhile childhood summer. But the free spirited, fun loving child that roamed the castle with innocent glee has been replaced by a heartbroken woman full of remorse and shattered by regret. And now, she's beginning to question her sanity when an alluringly familiar voice in her head opens the floodgates to a piece of her past long forgotten.

Can a lie that destroyed one life give another the truth it needs to be whole?