Sisterhood of the Travelling Blog - ROUND ONE 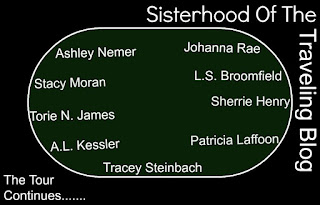 Welcome to our second round of Sisterhood of the Travelling Blog! Join us nine authors as we talk about our writing, our characters, our inspiration and ourselves! This week I am hosting a blog entry from Sherrie Henry as she tells us about some of the wonderful characters she has created. You can find my entry on her blog this week.

Ø  In your upcoming works in progress or new releases, what character are you most looking forward to your fans reading and why?

Of course, the administrator of these blogs, Ashley Nemer, has provided an almost impossible question to answer. I love all my characters and would like to think each and every one of them is interesting and entertaining.

How about I just list what’s coming up in the next few months (fingers crossed) and tell my favorite at the end:

Coming first quarter 2013 is my novella ‘A Wolf’s Bane’ from XoXo Publishing. Kai and Romy have found each other, but can a werewolf and a human really find happiness? Culture and tradition force them apart, but can they really be separated? Their path is a long and perilous one and one wrong choice and Kai may have to choose a path that includes death.

My first novel ‘Last of the Summer Tomatoes’ has been submitted for publication and I hope to hear any day now if it was accepted. It’s a young adult gay romance story between teens Kyle and Sam. Kyle is from an abusive home and has never learned how to feel, let alone love. He meets Sam who teaches him what he’s heard his entire life isn’t true … that he is deserving of love. But what will happen to the two at the end of the summer when they have to go their separate ways?

My current novel-in-progress, ‘Lucien’s Story’ is nearing the half-way mark; and the title is in flux as I don’t think it’s catchy enough, but had to name it something, didn’t I? Lucien is a very old, very sexy and very slutty vampire who has an estranged relationship with his daughter that he wants to repair. His move to NOLA marks the beginning of a new life for him as he quickly becomes involved in his daughter’s affairs, his daughter’s friends’ affairs, and babysitting a hot-tempered vampire to keep him from self-destructing. Add on to this his feelings for another female that he hasn’t had since his wife died four hundred years ago and you’ve got one messed-up vampire with a compelling story.

Also in my WIP folder is my sci-fi novel ‘The Romance of Gael’, a gay vampire romance ‘Breaking Tradition’ and a document full of story ideas that may take a lifetime to complete.