Spring is in the Air Blog Hop! 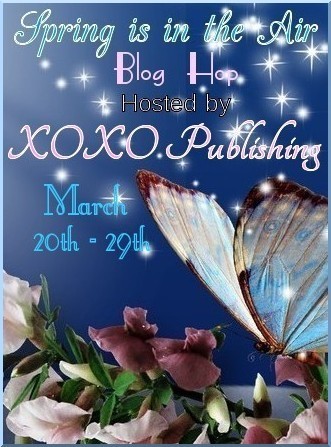 Marren stood with his arms folded across his chest, one leg bent and the ball of his shoe pressed to the wall for balance. The telltale aroma of developing chemicals sailed past his nose carrying with them the promise of another pay check. The small ruby in his signet ring gleamed under the fluorescents as Marren raked a hand through his unkempt brown hair. He craved the satisfaction of a cigarette but that would have to wait. Blending into his surroundings came with the job description but even so, it seemed as though David had forgotten he’d even come in.

The bell on the door sounded and a female breezed in. Her long dark hair fell to her waist in soft waves, swishing from side to side as she tried to juggle all her camera bags and equipment. Small slender fingers clutched the strap of her purse, somehow threaded through the entanglement of other handles and cords. Words started coming out of her mouth before David had even come to serve her, anxious words and frustration.

Stroking his jawline, Marren watched with interest. She carried herself with elegance and poise which implied a good upbringing but she was young. He suspected her to be the age she appeared, mid to late twenties. Nowhere near as old as he with his nine centuries of barely existing. Oh what a delight it must be to have such a young and vibrant outlook. He couldn’t remember what that had been like and couldn’t be sure he’d ever had it to begin with.

At the counter the female battled with the strapping as she tried to wrench herself free, still giving David a real earful. Marren placed a finger to his lips to hide the chuckle threatening to spill forth. From what he could gather, David had serviced her cameras and something hadn’t gone according to plan. As her tiny hands darted about all over the place and she allowed her temper to reign, Marren found himself unable to turn away from the spectacle.

By this time David had stopped arguing with the feisty girl, eager to subdue her before any other paying customers happened along. Marren grinned and stepped over to the counter.

“I do believe recompense is in order.”

Marren’s gold eyes twinkled and his smirk removed any concerns David might have had about aggression. As the shorter, slighter man looked up at Marren, his features darkened. No matter how relieved he might have been that Marren chose to deal with the situation peaceably, he didn’t like to be made fun of either. Turning back to the female, David began trying to negotiate a compromise.

When she seemed satisfied with the arrangement at last, David made some notes in his logbook. With a glare at Marren, he snatched the tangle of cameras up off the counter and marched off. The moment he’d disappeared from sight the girl sagged, almost as if she’d expended every ounce of energy in the display of assertion for David.

“I doubt I shall receive my order at all now, I think I’ve pissed him off.” Marren quipped.

Hand poised to sweep her hair back over one shoulder, the female gaped at him. “Oh! I’m so sorry!”

Marren shrugged. “It’s not the end of the world, I’ll come back tomorrow night.”

“I really do hope he fixes the problem, I’m lost without my equipment. Those are the only cameras I have. Damn that man for being the only developer open at night!” She blushed and averted her eyes. “I… tend to prefer to work after dark.”

“That’s rather unusual for a photographer.”

Marren’s lips turned up at the corners as her eyes widened and she didn’t seem to know how to respond. He knew exactly what she was, vampire like himself. He found it most curious that she hadn’t picked up on his being another creature of the night and concluded that his estimation of her age had to be correct. Only a youngling wouldn’t have picked up on an aura as powerful as his. It seemed cruel to toy with her after she’d become so worked up about her camera equipment, so Marren took pity on her.

“I prefer to work at night too.” He said as he folded his arms across his chest.

“Oh?” She spun around to face him.

Marren leaned in close enough to whisper. “The humans tend to let their guard down at night. I find this time of year especially entertaining.”

At last she seemed to grasp their common ground. He’d thought it would relax her but if anything she appeared even more cautious. “Why this time of year?”

“Spring is in the air. Have you not noticed how the humans love springtime? Tis the time of new life after all? Romance, flowers, that sort of thing. I should know, I’m a PI. I get ten times as much business in the spring.”

“I will show you if you let me.” Something about this female drew him in like moth to flame. He didn’t want to let her slip away.

“Show me what? Romance and flowers?” She let out a tinkling laugh. “Was that some sort of pick up line?”

“Not at all,” Marren lied. “I had planned to show you my favorite hunting ground. I can smell your hunger, I know you haven’t fed in a while.”

“That man is watching us.” She hissed.

He looked up to find David staring at them from behind one of his machines. The developer knew he wasn’t human and didn’t like Marren very much. Though he would never reveal the secret, Marren knew he would never gain the man’s trust. He smiled and waved at David as though they were old friends and the developer quickly became interested in his work.

“Say yes,” he smiled at the female. “What do you have to lose? One night, one hunt. Then if I have not impressed you to your satisfaction I shall leave you alone.”

“So you plan to keep bugging me until I agree to this?” She raised an eyebrow, and mimicked his pose by folding her arms too.

“Yes indeed,” Marren grinned at her. “Is it going to take long? I may step outside to smoke a cigarette while I wait.”

“You seem so sure I will say yes.”

Leaning in close again, he whispered a second time. “Whether you choose to act upon it or not, I can also smell your lust.”

A gasp left her lips and she shrank back from him. Her reaction only served to confirm his accusation and Marren chuckled. Dragging a pack of cigarettes from the pocket of his coat, he held them up for her to see.

“Alright little one I’ll be outside over there, when you’re ready.”

Once out on the street, Marren placed the long thin stick between his lips and lit the end. Taking a drag on the cigarette, he watched the female inside the store. Her eyes did not leave his form and every time he moved, her gaze followed. She waited until he’d finished smoking and then adjusted the strap of her purse. Holding her head high, she walked out of the shop and strode over to him.

“Good.” He grinned, crushing out the cigarette on the sidewalk.

“A spring hunt.” A hint of humor laced Marren’s tone.

“You’re going to be trouble, aren’t you?”

This time Marren’s laugh rumbled out of the very center of him. “Every step of the way. Still coming?”

“Wouldn’t miss it.” She declared, her chin thrust out in stubborn defiance.

Marren shoved both hands in the pockets of his coat and started walking. He could hear her heels clacking against the pavement behind him as she struggled to keep up.

“One more thing,” she announced from behind him. “This doesn’t mean I like you.”

“I’ll bear that in mind, little one.” This time he didn’t even bother to hide his amusement.

“Then I’m very pleased to make your acquaintance Erica, my name is Marren.”

Though she protested, he knew his charms had worked. One chance, that’s all he needed, he knew could do it. It might only seem like a spring hunt to her but Marren knew it was just the beginning.

If you enjoyed that short story, you may also enjoy Johanna’s novel – The Mercenary. It is the first in a shapeshifter series called “Therian Secrets”. Come and meet the colorful repertoire of international characters. Come to New Zealand and immerse yourself in the seaside town of Redcliffe, the place to go if you are a rogue shifter or hiding from the watchful eye of justice. Meet the colorful cast of international characters and join them for a journey of suspense, intrigue and romance. For a more detailed synopsis or to purchase the book please use the following link:  THE MERCENARY (On Amazon) 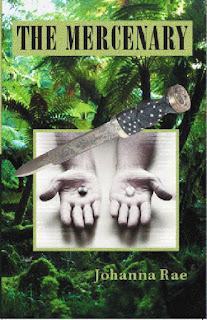 An ebook copy of The Mercenary is up for grabs! All you have to do is make a comment on this blog post and tell us what your favorite thing about spring is. A winner will be drawn at the end of the hop. Winner must provide an email address to receive the prize.

There is also a grand prize across all the blogs within the Spring Hop. XOXO are giving away an ebook prize package and it could be yours!