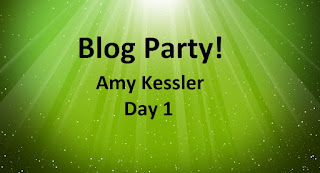 Please give a warm welcome to Author A.L. Kessler to the blog today! She is celebrating her new release In the Light of the Moon part of her Dark War Chronicles series this week. To celebrate we are giving away a prize each day till Sunday! So make sure you come back and see what happens each day. 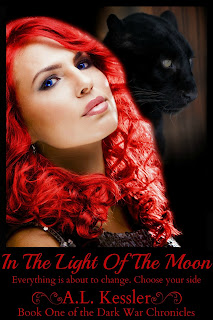 Stripped of all control, panther shifter Kassity has no choice but to be a killer for Lucius. Obeying the vampire was simply her way of life, until Jax comes to town and brings trouble with him. When she recognizes Jax as her fated mate, Kassity must deal with betrayal, secrets and Lucius in order to be with him.

With a war raging between all supernatural creatures Jaxon must decide who he is fighting for-and against. What started as a simple job turns into a complicated game of hearts when he meets Kassity, the woman he thought he was rescuing. But not everything is as it seems in Lucius' territory.

“Impressive cat you’ve got there.” The male’s blond hair was cut close to his head, his blue eyes wandering over her body as he grinned.

“You’re here to talk business, Derrik.” Lucius reminded him with a growl, sitting back in his throne. “Something about your wolves being killed?”

Derrik nodded. “Your last raid really took a toll on my pack. We had three of our security people killed and two of our bartenders.”

“They were careless, what do you expect?” Lucius shrugged. “It’s part of war, the weak get killed.”

He took a step forward, his fists clenched. “Part of the war? I loaned you my members as part of the treaty and now I’m short handed a club that you fund.” He snapped. “I need more employees if you’re going to keep sending my men on wild, dangerous goose chases.”

“That last one was a success, we located the corpse that we think the stone belongs to.” Lucius and Kass both looked over as Tegan stiffened at the mention of this stone. “You want more employees, go hire some. All I did was give your pack the money to start the club. I really want nothing to do with it because it is a place for you and your kind to hide.”

Derrik shook his head. “You want me to hire humans? You’ve got to be kidding me. Humans don’t belong in our world, it’s dangerous.”

“What do you suggest then?” Lucius pressed his fingertips together and leaned forward. “That I give you employees? I have a bar to run too.”

He shrugged. “Just give us some people on loan, at least until I can find other sups to fill in.” His eyes fell on Kass. “Like her.”

“Kass is one of my best in bartending and in security, you get her you don’t get anyone else.” Lucius voice was calm.

She let her eyes slide to him, “You’re giving me to the wolves?”

“You have a problem with dogs little one?” Derrik asked with a laugh. “Promise we won’t bite.”

In the Light of the Moon is on sale this week only!! Come find it at:  Amazon, Smashwords and Createspace!


Today's prize is an ebook copy of Midnight Symphony! Please leave a comment with your email address to be entered to win!
Posted by J Steel at 12:01 am