This week I am proud to introduce Beverly Ovalle to you all. Today she will be promoting her book A Saint's Salvation, and after that we'll share a little about Beverly herself. Please join me in giving her a warm welcome! 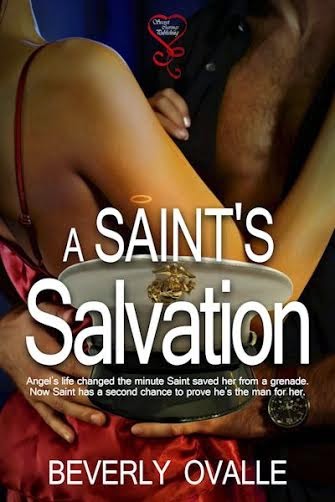 Tag Line:
Angel’s life changed the minute Saint saved her from a grenade. Now Saint has a second chance to prove he’s the man for her.

Blurb:
Corporal Nicholas 'Saint' Santiago needs to go home to reclaim the man he used to be. To be the man he was before Operation Enduring Freedom slowly hardened his heart. He needs to reconnect to the values and the reasons he is doing what he does. Saint also needs to try to forget the courageous woman he knows was meant to be his.

Petty Officer Angelina Jones' life changed the moment Saint saved her life. She survived the blast but now has to deal with the fact that she will never be whole. Knowing Saint received a 'Dear John' letter, Angelina has no intention of being his rebound romance. She needs to be loved for herself. She needs to forget about the one man she knows was meant to be hers.
They each try to find someone to help them forget.
But what does fate have planned for them?

Beverly Ovalle lives in Wisconsin with her husband Edmond of 24 years and two Chinese Water Dragons. Having her own Dragons is expected as she is dragon crazy and anyone that walks in her house can tell. Her son Nicholas visits when he is on leave from the Marines.  Her daughter Susannah visits to grocery shop in the pantry and to see what might be cooking for dinner.

Beverly has traveled around the world thanks to five years in the US Navy and has worked for the government in one capacity or another for the past 30 years. Beverly and her brothers have travelled most of the continental United States as children due to the station wagon from Hell.  Still active with veterans, she is adjutant for her local AMVETS.

Beverly has been reading romances since her Aunt introduced her to the gothic romance in the fourth grade and is still reading every chance she gets.


Blog: http://SSLYblog.wordpress.com
Posted by Johanna Rae at 10:22 am