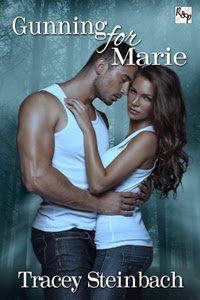 The fabulous Tracey Steinbach has a new book release!

Blurb:
Several years after the third World War, resources are scarce. The poor are poorer and the middle class doesn't exist anymore. A man with resources travels from city to town buying teenagers from desperate parents and orphanages. The teens are educated, fed and clothed as appropriate for their end purpose, Soldier or Breeder.

A strong, young woman, Marie Rice, falls for Gunnar Lincoln. Their attraction is forbidden, Marie meant for someone else. Disturbing events on the island lead to Gunnar and Marie looking for a way to escape and save everyone else. While they bide their time, attraction turns to something stronger. Will they escape? Will they save the others?

Excerpt:
“Your team will have to be faster if you want to be any real competition, Marie,” Tyson said.
“You were one step ahead of us, Tyson. One step,” Marie replied.
“That one step could mean life or death. Haven’t you learned anything?”
“I learned a long time ago. You’re an asshole,” Marie said.
Tyson smirked. “You still want me, though.”
“Yeah. Right.” Marie rolled her eyes and turned on her heel. “You won so you clean up. Have fun with that.”
“What do you think the new ones are for?” Tyson snapped his fingers above his head and two of the newer recruits rushed over. “Clean this up.”
Marie watched the recruits jump to do Tyson’s bidding. She wanted to shake her head but refrained. Emotion, no matter what kind, was weakness. Didn’t mean she couldn’t think that Tyson was a major dick. He enjoyed the killing way too much. One day she expected to find him bathing in the blood of the fallen.
Movement to her right caught Marie’s attention. As quick as a snap, her rifle was pointed and her mind focused. “You should pay more attention.” Gunnar said, straightening to his full six foot two inch height.
“I knew you were there.” Marie said. She hadn’t but no way was she going to admit it.
“Riiight…”  Gunnar took a step towards her.
She caught herself before she could take a step back. “What are you doing? Stalking me?”
“Could be. Or maybe I was scouting the perimeter and you just happened to cross my path.” Gunnar smirked. “I’ll never tell.”
“Uh huh. You better get back to your scouting before Tyson catches you talking to me,” Marie said.
“He thinks you’re his. It’s only a matter of time,” Gunnar said. Marie watched some emotion flash through his eyes before it was gone.
“He’s delusional. But I’ll watch my back.” She frowned.
“You do that. I’ll be watching it, too, just so you know,” Gunnar said before pressing his lips into a tight line.
“Um. Thanks…” Marie didn’t know how she felt about that. On one hand, she wondered if he thought she was too weak to take care of herself. On the other, she wondered if he had his own motive for watching her. Was he more like Tyson than she thought?
“I need to move. Remember what I said, Marie.” Gunnar walked away after that reminder.